Greener than What?: the shortfalls of comparing milk packaging options within the disposability paradigm 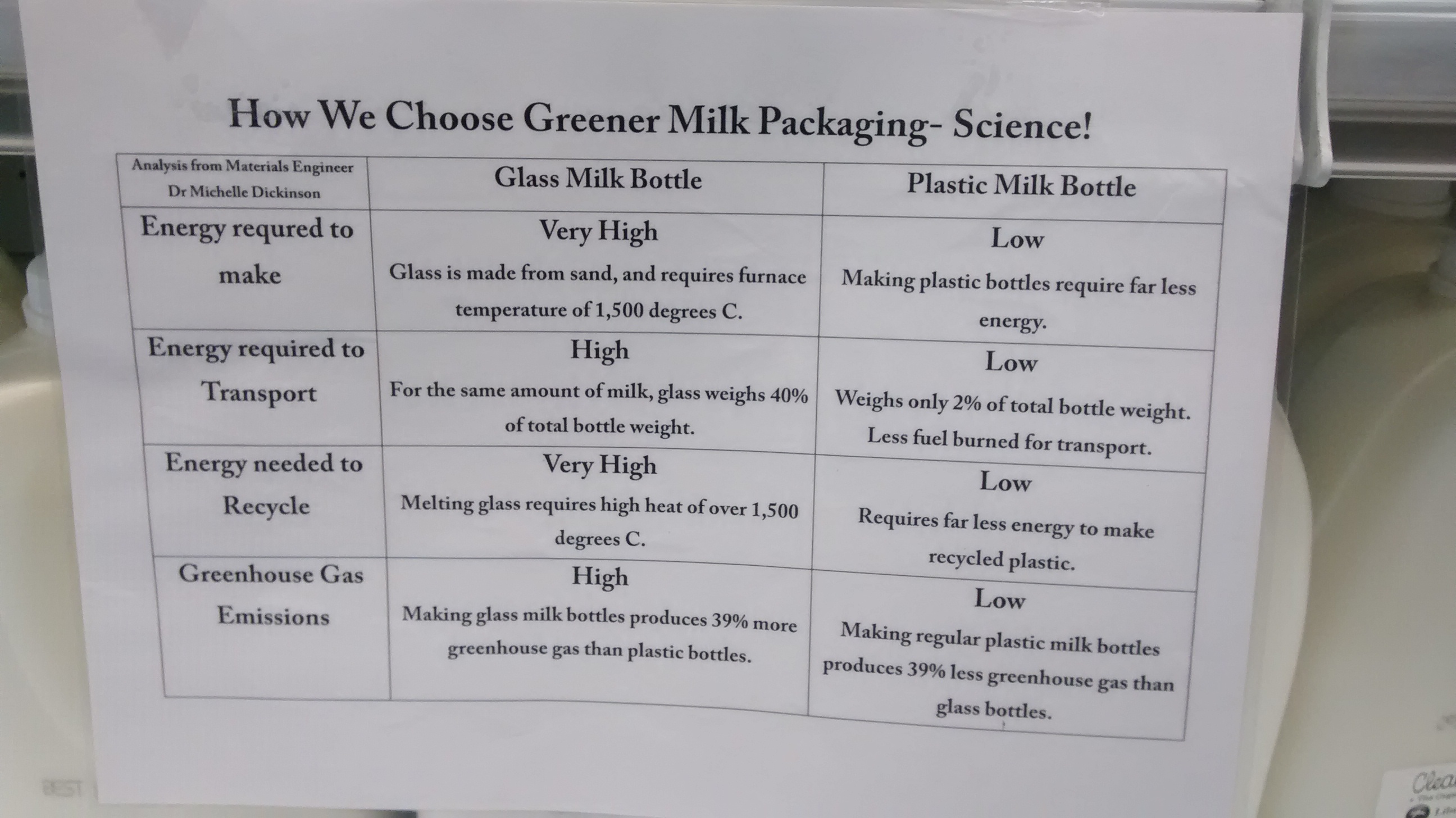 What does ‘greener packaging’ even mean in the context of an unsustainable packaging system?

Basically, comparing the overall environmental impact of different kinds of disposable packaging is very complicated and cannot be neatly summarised on an A4 chart that focuses on energy production alone based on a series of assumptions that vary even within a small country like NZ with a fragmented, inconsistent recycling system, heavily dependent on imported inputs and recycling export markets. Our main beef here is that we disagree with using this partial analysis to justify continuing the business-as-usual approach to packaging or implying that science can declare this approach more green, when really it’s a different shade of grey.
Ultimately, we need to devise new ways of getting products to consumers, with a greater emphasis on refill/reuse systems, which not only produce fewer carbon/emissions and waste, but can be cheaper for businesses too. Glass is a good medium for this (some countries do also use high quality plastic bottles in reuse systems), provided the geographic circuit the product is travelling is not huge. This requires us to rethink the way we distribute goods in this country to keep transport distances shorter and more local. Milk is an excellent candidate for this system because we’re a dairy producing nation where dairy farms are always nearby. We could also be installing milk vending machines into supermarkets/public places around NZ and filling those machines up from milk trucks rather than carting bottles around.
While all this might sound idealistic and unrealistic, it’s actually not but it does require openness to change. Many countries are talking about refill and reuse systems for milk and other products and are instituting them already, as are parts of NZ (again, Nelson has it sorted). Furthermore, these concepts are a part of the circular economy philosophy – a philosophy that is increasingly accepted as “inevitable“. Shifting towards refill systems is also one of the four key principles/solutions of the Plastic-Free NZ Action Plan. In New Zealand, we have regulatory tools available to assist with reuse system logistics. For example, instituting a bottle deposit system under the Waste Minimisation Act would improve recovery rates for glass bottles and could thus help facilitate a coordinated glass bottle reuse system, if this were planned for.
The alternative – continuing with our linear, disposal-oriented economy, producing large quantities of waste from packaging everyday household items in a toxic material derived from a non-renewable resource that is not infinitely recyclable – is not only unambitious, it’s unsustainable and expensive.
Author: Liam & Hannah
Filed Under: Thoughts and musings
The Rubbish Trip Has Gone Car-Free!
Zero Waste in New Zealand in 2018: A Year in Review

2 thoughts on “Greener than What?: the shortfalls of comparing milk packaging options within the disposability paradigm”