Why We Don’t Fly 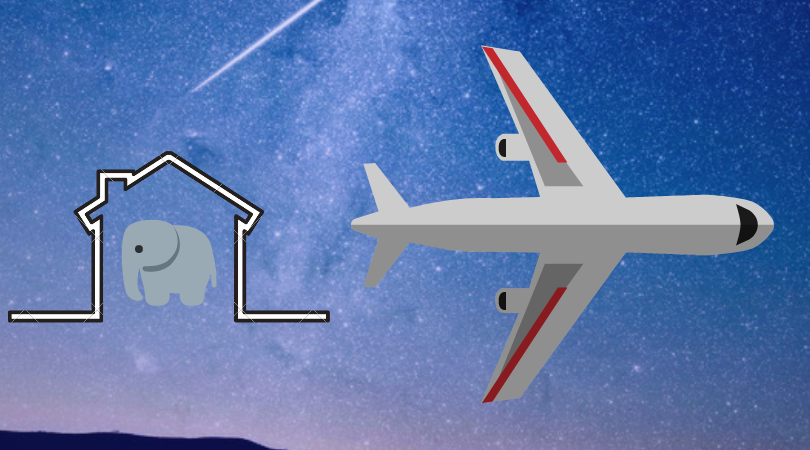 Recently, we discovered No Fly Climate Sci, a loose grouping of academics, earth scientists and the general public who choose not to fly or to fly less in light of the fact that flying dominates the emissions profile of the privileged few who can afford it. The group was started by earth scientist Peter Kalmus, author of Being The Change: Live Well and Spark a Climate Revolution. We really urge you to look him up!

So impressed were we by No Fly Climate Sci that this weekend we signed up to become members! You can read our piece in the Biographies section of the website (and check out some of the other biographies too – they’re so inspirational, we’ve been binge-reading!).

Not flying has been always been a non-negotiable for The Rubbish Trip. It’s something we don’t talk about much, but we’re really proud that we manage to run this nationwide speaking tour without ever getting on planes.

We believe it’s fairly common knowledge that flying carries a hefty carbon footprint, yet many people who profess to care about climate change hop on planes anyway. We don’t think these people don’t care. We just think they’re probably unaware just how bad flying is for their emissions profile. Perhaps they haven’t looked this up because they’re scared of what it might tell them. After all, once you know, you can’t unknow.

In fact, we were also unaware how bad flying might be for our emissions profile until quite recently, when we started tracking our transport emissions using the ACE Carbon Calculator. What we discovered when we tried out some “counter-factuals”, just for interest, blew our mind…

The easiest way to think about this is to take a Personal Carbon Budgeting approach (just like we budget our $$, we can budget our emissions). The 2018 IPCC report set out the global carbon budget the world has left in order to keep global warming below 1.5 degrees Celsius. While

measuring carbon budgets with exact precision is impossible and huge uncertainties exist even in the IPCC figures, personally, we consider the IPCC’s best guess sufficient for us; better to have a yardstick than none at all and we’re not going to second-guess a worldwide panel of climate scientists. That’d be about as doofus-like as one of those scientists telling Liam (a professional jazz drummer) how to clap in time.

When the IPCC global carbon budget is brought down to individuals, it equates to roughly 1.2 tonnes of C02 equivalent emissions a year per person (this allowance is continually decreasing though because humanity is using the budget faster than we should and population is increasing). This budget needs to cover EVERYTHING we do: transport, diet, consumer purchases, waste, so on.

So, to put this in perspective, two return flights between Wellington and Auckland uses roughly 0.59 tonnes of C02 equivalent, i.e. 50% of your annual carbon budget. That doesn’t leave you a great deal of room for much else that year, so is it worth it if alternatives exist? It’d be a bit like spending 50% of your income on a Porsche, when a Toyota Corolla would do the same job (albeit less stylish and more bumbly), and then having only 50% of your salary left for everything else for the rest of the year.

Sadly, a return flight from Auckland to London uses 7.09 tonnes of C02 equivalent…

If we want to take these flights, we probably should ask ourselves what sacrifices we’re willing to make in the rest of our lives: sell our car? Give up red meat? Only eat food grown within a 100km radius? And even then, would those changes keep us emissions credit? Answering this last question requires sitting down and using a carbon calculator, like we might do a tax return, not just making an optimistic presumption.

The final blow for those of us who can afford it is that offsetting is not the answer. We do pay to offset The Rubbish Trip’s transport emissions, but we know offsetting doesn’t change the fact that the emissions are floating up to the atmosphere and it doesn’t reset our carbon budget to zero. It’d be nice if it worked like that, but it doesn’t. Offsetting is like what recycling is to waste: better than nothing, but the only real approach is to keep working on reducing our waste/emissions in the first place.

Everyone has reasons why these realities are difficult to face.

The Rubbish Trip functions perfectly fine, if not better, without flying. However, the reality about the impact of flying has serious implications for our personal lives. For example, Hannah was born in the UK, her entire family on her mother’s side lives in Italy, while her immediate family and most of her father’s side of the family is in New Zealand. Tackling carbon footprints has a real human impact for us and sometimes it’s heart wrenching. We’ve both made a number of international flights in the past at times in our lives when we didn’t reflect much on the footprint (for example, between us in our lifetimes we’ve made 9.5 return trips between NZ and Europe and various smaller international flights); we’re still in major debit for those, which now has implications for how and when we might leave the country again.

We understand the argument that in the scheme of things one person refusing to fly isn’t going to make a difference. But the difficult thing is that that logic can extend to everyone and everything in society – no one person, industry or government is single-handedly responsible for climate change. If we are to say “it’s too hard for me to live within my carbon budget”, what right do we have to get rageful at our politicians or at businesses that refuse (or struggle) to change or do anything? After all, they’re just making those very same arguments, i.e. “too hard, we can’t do it, no one else is doing it anyway, and we have special reasons for our emissions that make them justifiable, like we’re really busy and important or we’re delivering an awesome eco message”.

Ultimately, we believe that if we start to change as a society so that living within carbon budgets becomes second nature for everyone, and particularly if we model this to encourage and raise younger generations to think this way, that second nature approach is going to come with us when we become business owners, politicians, professionals, householders, social or environmental advocates, or whatever other role in society we may have.

Our current social problem is we can’t imagine another way of living and we don’t want to turn down the things we like. Incidentally, this is the same wall we come up against when encouraging people to reduce waste – we like the new objects, the branding, the convenience, the thrill of travel and we REALLY don’t like change. However, if we genuinely want to live in a world that is uncontaminated by our rubbish and our fossil fuel usage, we have to be ready to face the uncomfortable truths that the science is telling us.

Author: Liam & Hannah
Filed Under: Thoughts and musings
Zero Waste in New Zealand in 2018: A Year in Review
Our Position on Essential Oil Use in Homemade Toiletries