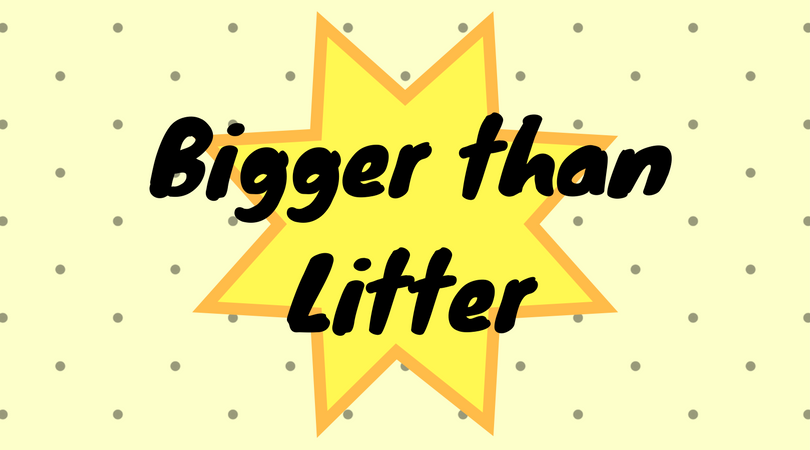 A general announcement that we are foraying into the land of Instagram to launch a new series called Bigger than Litter, which aims to unpick some of the forces behind Aotearoa’s growing tide of rubbish pollution.

While travelling around the country on The Rubbish Trip, it’s hard to avoid finding rubbish lying about almost everywhere we go. And we meet a lot of people who are picking up a lot of rubbish from all kinds of places too – off the streets, off the side of the road, off the beaches, in reserves, the list goes on…

In those moments when you are scratching around in gutters, or bent over like a safety pin picking up shards of plastic off the beach rather than staring wistfully out to sea, it is only natural to get frustrated and to wonder why this keeps happening.

Perhaps, anti-littering campaigns, like Be a Tidy Kiwi, or Keep New Zealand Beautiful, might pop into your mind. These campaigns tell us that if we want to keep our natural environment pristine, we should be mindful of putting our rubbish in the bin rather than just chucking it on the ground. During our trip, we’ve seen these campaigns everywhere; in Tokoroa we even found a bin that had adopted their own, slightly flippant terminology: “Take some pride in your community! Biff it in the Bin.”

Of course, when we have rubbish, the last thing we should ever do, is litter.

But, honestly, not littering is a bit of a bare minimum for responsible waste behaviour. Why? Because bins are not magic delete machines; the rubbish thrown in them lives on, even as we might walk away from the bin and erase from our minds whatever we just left in it.

The idea that our moral duty to keep New Zealand beautiful only extends as far as putting our trash in a specially designated basket in order to be transported to a big hole in the ground, is almost too easy. What if we reframed the conversation to say that putting something in a bin wasn’t actually enough, or that our belief that it might be enough is actually part of the problem?

Sure, a lot of the rubbish we find outside and in our natural environment may well have been littered, but not all of it will have been. A lot of rubbish blows out of bins and out of landfill – it leaks out of our waste management systems. The convenience of a rubbish bin hides this reality from us. It turns our waste into something that is ‘out of sight and out of mind’, something that someone else deals with that we don’t have to think further about.

For us, rubbish on the side of the road or on beaches is distressing and disturbing, but it’s also a disruption of the fantasy of rubbish as ‘out of sight and out of mind’. It is the canary in the mine, warning us that our reliance on bins to keep our throwaway society afloat is not working. We need to start thinking deeper about our waste, to question what or how much waste we produce, whether there’s something better or more ambitious that could be done with our rubbish, or to hold to account those who are manufacturing all this rubbish in the first place.

As far as we are concerned, the problem of rubbish pollution is much bigger than litter because littering can only happen when there is something to litter. Too much emphasis is placed on the individual’s failure to dispose of things correctly, rather than on questioning the continued creation of disposable items, and the convenience-based, throwaway culture that propels this.

We want to extend this conversation, and so we are dipping our toes into the realm of Instagram to launch Bigger than Litter. We’re going to start posting photos of rubbish we find lying around New Zealand, and consider what that piece of rubbish tells us about what is really causing our rubbish problem, and what we can do about it. For example:

We look forward to sharing these photos and hearing your insights and thoughts as well.

1 thought on “Bigger than Litter”