Preaching to “the Converted” #1: Rachel Benefield 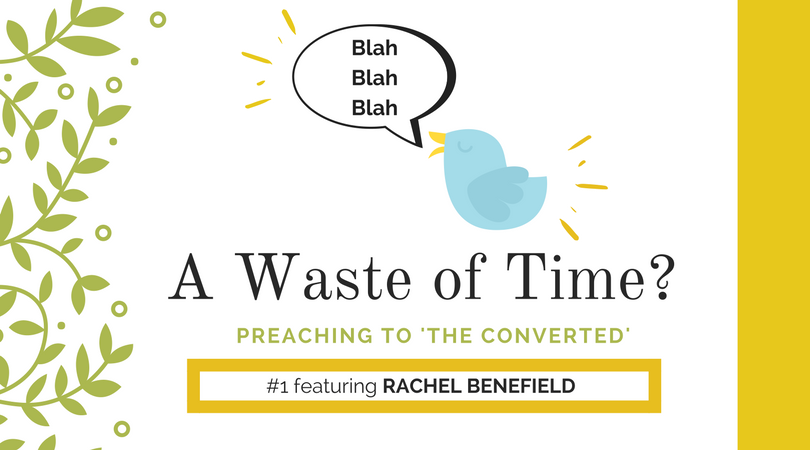 The first post in our “Preaching to ‘the Converted‘” series features Kāpiti Coast local artist, Rachel Benefield. Back in April 2017, Rachel attended our talk in Paekākāriki. Some might have said this talk was not a success – only five people attended. It certainly felt a bit awkward delivering a 75 minute talk to an empty, echoey and rather chilly Scout Hall one dark weekday evening…

However, in the end it turned out this event was more successful than we expected; of the 5 person-strong audience, two-fifths – that is, Rachel and her husband, Albert – went on to change radically their lifestyle. So much so that when we returned to Paekākāriki three months later, Rachel, Albert and their kids had virtually eliminated single-use plastic from their lives and Rachel had started delivering public talks about their new waste-reducing ways.

Since then, Rachel’s waste reduction advocacy has been expanding across the Kāpiti region and she uses her art as a key tool to advance her activism. One might imagine that Rachel’s passionate advocacy leveraged off pre-existing waste-free living, but as Rachel later said to us, even though she and Albert had always been passionate about protecting the environment, when she came along to our talk “waste was really not on our radar at all”. Now, she says that the biggest proponent of waste reduction in their household is her youngest daughter.

So, proving that one family’s actions can have a snowball effect, check out this short video, which Rachel produced recently (an adapted version of the Pecha Kucha talk she delivered to a packed hall in July 2017 – a far cry from our audience of 5!!), this feature on her family’s story (from Kāpiti Coast District Council’s August 2017 On To It newsletter), this Dominion Post article, AND this interview that Rachel did this year with Jesse Mulligan on Radio New Zealand!

This post is part of our blog series “A Waste of Time?: Preaching to ‘the converted'”. You can read about the origin and kaupapa of this series here.