Launching ‘A Waste of Time?: Preaching to the Converted’ 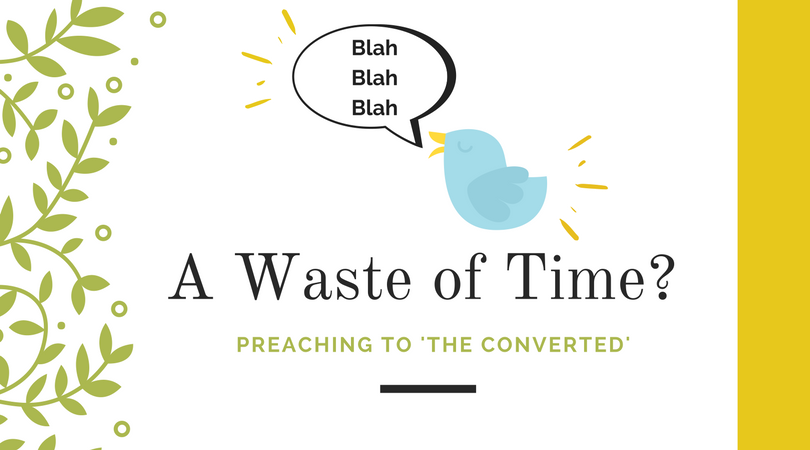 For over a year now we have been running public presentations on how individuals can reduce their household rubbish. If we had a $1 for every time an audience member has come to us at the end of our talk and said “it’s great what you’re doing, but I’m afraid you’re preaching to the converted here” then we probably wouldn’t have needed to run a crowdfund campaign. Jokes, it’s probably not quite that often, but it’s still pretty often.

Who are ‘the converted’ anyway and is there any point speaking to them?

While we understand the sentiment behind the ‘preaching to the converted’ statement, we feel it doesn’t really capture the distinction between people who agree that waste is a problem, and people who have then gone on to drastically reduce the waste in their lives. It is true that often the people who attend our talks fall into the first camp. However, much less often do they fall into the second; most people who come to our presentations are not already living ‘zero waste’. In all likelihood, they have decided to attend because they want to do more. So, in this sense, we are not necessarily telling a room of people stuff they already know (though inevitably there may be a bit of that going on sometimes).

We do not believe that talking about waste reduction with broadly sympathetic audiences is a waste of time. The purpose of our presentations is not to convince people that waste is a bad thing. Nor do we necessarily seek out audiences full of Glad Wrap loving, plastic bag worshipping naysayers looking for a fight or a life-changing epiphany. Our talks are not called: “Why waste is a problem and why we should care”. Our presentations are called “Reducing Our Household Rubbish” – they presuppose a degree of shared interest and are pitched at people who already see rubbish as a problem, who are looking for ways to articulate why it’s a problem, and for practical, evidence-based tips on how to cut their own rubbish back further.

In fact, this kind of audience is preferable if we are thinking about making a tangible impact because people who already get the kaupapa and who are looking for solutions are the ones most likely to go home and make changes, talk with their friends and family, and send ideas out through their networks, workplaces and local businesses.

The Rubbish Trip is not a crusade!

The preaching to the converted statement also implies that The Rubbish Trip is devised to be a sort of crusade, when actually The Rubbish Trip is really about realising the shared aspiration of a low-waste society through mutual learning. In an era where we have grown hypersensitive to the bogey of the echo chamber, it can be easy to forget the importance of sometimes talking with people who ‘get it’. For us, ‘zero waste’ is a continuing aspiration in which there is always more to learn from others active in the field. So, we really appreciate it when our audiences include people who are already doing a lot to reduce waste. Such audience members keep us on the straight and narrow, encouraging us to be thorough and evidence-based. And it’s important to remain continually critical about how we approach waste reduction to ensure that when we go to efforts to reduce our waste, we do so in an effective way (so-called biodegradeable products, we’re looking at you here!) – there’s nothing better than a solid and well-connected zero waste community to keep us all on the ball.

Often the key unspoken message lying behind the ‘preaching to the converted’ observation is a scepticism about whether our presentations really have an impact, or a belief that they could be more impactful if only we targeted what one journalist called ‘Joe Disposable’. In response to this scepticism, we maintain that starting with people who are open to the conversation is the most efficient path to follow. Obviously, we are happy for anyone to come to our talks; if people want to bring along their reluctant flatmates, kicking and screaming, please do! However, the reality is that to trigger societal change, we don’t actually have to convince everyone on the planet that waste reduction is necessary. We just need to bring together a critical mass that will effect the creation of the new normal through leading by example and putting pressure on businesses and politicians to make changes that will ultimately affect everyone. And if we only need a small critical mass, then it makes the most sense for The Rubbish Trip to focus our energy on the ‘low-hanging fruit’ rather than scrambling around at the top of the tree trying to pluck off waste overlords at the Packaging Forum through elaborate ploys of mass conversion.

So, essentially, our hope is that people who are open to reducing their waste continue to come to our talks, find at least something we suggest that seems do-able and which they want to try, that they leave motivated to think about how they can reduce their waste further, and that they pass on ideas to others too.

And, in our experience, this is exactly what happens. Three years ago the public-facing, rubbish-free advocacy of people like Bea Johnson, and Waveney Warth and Matthew Luxon, inspired us to try living without a rubbish bin. Now, we are seeing that our talks have influenced people to make (sometimes drastic) changes and to take up their own advocacy. This on-going ripple effect is a total inspiration to us. We wouldn’t consider it to be any more or less successful if those people were already avid eco-warriors in other areas of their life, or if they were once manufacturers of Styrofoam lunch trays, who used to laugh as they poured kerosene into rivers while strangling Takahē. The key thing is that the network of people talking about and normalising low-waste lifestyles in a practical and visible way is growing, and importantly, that people practice what they preach in an informed and critical manner.

We have decided to start a series of blog posts entitled “A Waste of Time?: Preaching to the Converted” These posts will feature stories from people who have come to one of our talks and then gone on to make changes in their own lives and beyond, or people who have been reinvigorated to develop their own waste reducing work further. We hope these stories demonstrate that we are not always delivering talks to raging hippies, but that even if we were, advocating waste reduction to like-minded people can be an effective way of instigating change (especially if those like-minded people find that they are able to lighten their waste footprint further after attending one of our talks and/or to pass that knowledge on). We hope the stories demonstrate that as each one of us makes changes, our combined influence grows, as does our combined knowledge pool as we challenge and encourage each other (and those in positions of power) to work towards a low waste society.

We will post the first instalment of this series in a few days, featuring the story of a Kāpiti Coast local, so keep your eyes peeled!

1 thought on “Launching ‘A Waste of Time?: Preaching to the Converted’”