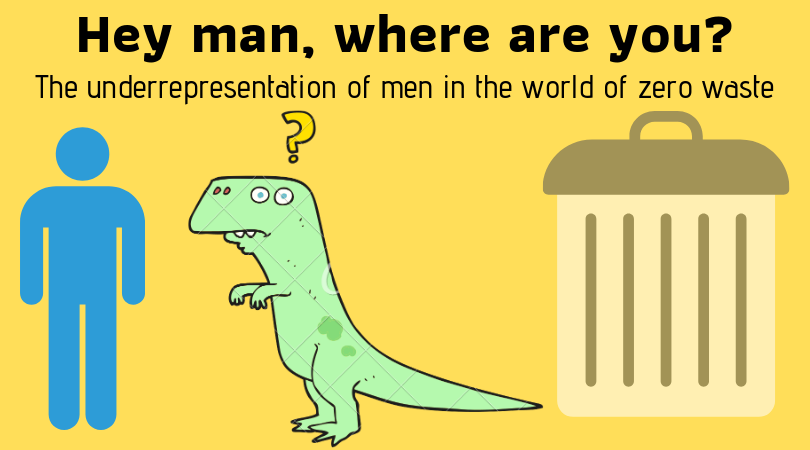 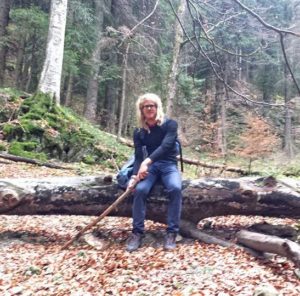 Liam here – usually, The Rubbish Trip’s posts are co-authored, and although both Hannah and I are interested in this issue, I wanted to share my own thoughts (as a cis-gender, heterosexual male) about why there seems to be so few men involved in the zero waste movement.***

You may be thinking, “Oh no, not ANOTHER article about how women carry most of the burden of zero waste living!” You’ve probably seen at least one already. Although, if you’re male, chances are you haven’t. So, here’s one I hope the boys will read too.

The fact that women drive the zero waste movement is reflected in participation numbers: as of October 2019, The Rubbish Trip FB page shows our ‘fans’ are 89% female (or 88% female ‘followers’); in June 2019, members of the Zero Waste in NZ! FB group were 84.6% female, 14.8% male, 0.6% custom. Sure, stats show that more women than men actually use social media in general, but the difference is not anywhere near the huge disparity mentioned above. Furthermore, we see this gender discrepancy in RL too – at our zero waste talks, time after time, we might see a man or few (if any!) sitting among a full crowd of women. Others who run zero waste workshops note this too. Literally the ONLY time our audience has ever been majority male was that one time we spoke at an engineering consultancy, which probably tells you as much about engineering as it does zero waste.

What’s the issue? Does this even matter?

Sometimes the explanation for the female-dominance in zero waste/environmental lifestyle change is that while women discuss and share their experiences, men tend just to be out there ‘doing it’ without publicly sharing (see the comments on this post, for example). This feeds nicely into gender stereotypes – the independent man minds his own business and gets on with the job, whereas women willingly talk about achievements and struggles with a wider network of friends, family and community. Personally, I find this idea problematic:

The thing is that having a diverse range of people publicly sharing their zero waste struggles and achievements is VITAL if zero waste is ever to become the normal way of doing things. Female over-representation in the zero waste movement may well act partly like a self-fulfilling prophecy, making some men feel the lifestyle is not relevant to them. Think about it in relation to other identities – if a CEO of a large company shares their personal zero waste endeavours and how that influences their business decisions, businesspeople might sit up and take note. A farmer publicly demonstrating what is possible in a rural context is probably more relateable to other farmers and rural people than an urban hipster.

What I’m trying to say is that if men were to talk more about what they do to reduce their waste (particularly in relation to historically male-dominated spaces like construction, mechanics etc), this could open up zero waste to a much broader segment of society. Already we see a social conversation around how important good male role models are for young boys; shouldn’t this include men who show care for the wellbeing of our environment?

The trouble is, do men genuinely care?

A study from late 2017 found that eco-friendliness is actually perceived as stereotypically feminine, and that men are likely to consciously make less ‘green’ choices to maintain a masculine image. Our experience, at our talks and from written feedback after our talks, is that many men seem more interested in policy change and in targeting corporations because this will trigger the ‘real change’. The implication is that lifestyle change is ineffectual, cute, feelgood stuff that doesn’t make much difference overall.

Obviously, I don’t agree with this perspective. We need change on all levels of society, because changing one without the other will never be enough. Furthermore, humans are totally capable of doing more than one thing at the same time (and let’s not get into gender stereotypes about multi-tasking…). However, I do also wonder whether this stubborn desire to focus single-mindedly on the ‘real issues’ is actually just a way of justifying lack of personal action? It would be interesting to see a gender breakdown on the submissions to the recent Government consultation on product stewardship, for example, to see if more men really are focusing their attention on government and corporate change… In fact, there is evidence that many men don’t support top-down action either. For example, a Colmar Brunton poll from late August 2019 asking whether respondents favoured a ban on single-use plastics found that the one demographic group most likely to oppose a ban was men aged 18-54… Hmmm!

Straight up, as a man, I’m a little confused by all this. I don’t feel any less of a man because I want to breathe clean air, drink pure water, have unpolluted, fertile land for healthy kai, or because I care for the wellbeing of other living creatures.

But if some men genuinely do shy away from these things (for whatever strange reason), how can environmental justice be made relevant? Should campaigners, advocates and marketers use stereotypically masculine images, colours and themes to try to make green messaging more appealing?

Hannah and I have often discussed whether we should drop the word “household” from our flagship presentation title – Reducing Our Household Rubbish – and use images on our promotional flyers that feature less homely things and more monster trucks.

Ecofeminism <– stay with me, guys

Trying to ‘masculinise’ campaigning to broaden engagement may have some merit. However, the thing is it doesn’t address the core association between environmentalism and femininity, nor does it dismantle harmful masculine stereotypes or the idea that being seen not to care is manly. These are all major problems. A better approach would be to disassociate environmentalism from femininity, by making it acceptable for men to be seen to care about the wellbeing of the life-system that he actually relies on to survive because that would be, I don’t know, sensible?

Because gender identity seems so important to whether one cares about environmental wellbeing, we should not ignore feminism. At risk of mansplaining how feminism is relevant here, I want to highlight one version of feminism that provides useful ways of thinking about this issue: ecofeminism. Numerous definitions of ecofeminism exist, but what it pretty much boils down to is:

… the analysis that social oppression and environmental exploitation are inextricably linked to fundamental social constructs that have co-evolved with patriarchal capitalist-colonial power relations. Researchers have both theorized and provided evidence of material, structural, and ideational links between the degradation of the ecosphere and power asymmetries between men and women (Gender and Environment Handbook, p. 2).

Or, in normal speak, the attitudes behind sexism and gender inequalities are the same attitudes that have led to nature being exploited and degraded. Importantly, ecofeminism is not saying environmentalism is feminine. Rather, it emphasises “the connections between the treatment of women and the treatment of nonhuman species and the natural environment” (Pease 2019, p. 117), and it views feminist goals of egalitarianism and balance (in contrast to patriarchal values of domination and control) as vital for environmental protection and wellbeing.

This perspective can help us rediscover our human interdependence with the rest of the natural world, rather than believing and acting like we are separate from or above it. The outdated view that men sit above women and nature in a ‘natural’ hierarchy or order has harmed the natural world and resulted in a world where biodiversity, ecological balance, clean air, water and soil – all absolutely essential for human wellbeing and survival – are increasingly degraded, polluted and threatened to the point of collapse. We need everyone on board to help clean up this environmental mess we have created – and men must pull their weight too.

Taking ecofeminism seriously could start to fundamentally challenge how we humans structure our society and economy.

Conventional economic thinking not only neglects and undervalues environmental health (through things like the ‘externalisation’ of environmental costs), but also certain types of human labour done predominantly by women – particularly volunteer and domestic work. Studies show women still do the majority of domestic tasks, even in heterosexual households where both partners work full time (see this book for a good discussion of these issues in NZ). While feminist struggles over the 20th century have secured women’s inclusion in the traditionally male-dominated workforce en masse, the flipside – men’s growing involvement in domestic life – has not kept pace. This also helps to explain female over-representation in zero waste and other environmental issues – why more often than not, women are the ones doing the hard yards in making and keeping households and communities zero waste spaces. This work, despite being essential to human success and achievement, is unfairly undervalued.

So, I see the task for men as twofold:

Basically, we need more (all) men talking about the problem, and we need more men walking the talk – not only finding and sharing zero waste solutions to vehicle maintenance and house renovation, but to shopping, cooking and cleaning too!

I’m interested to hear your ideas (whatever your gender)! I’m going to try a few strategies in the coming months (via social media, interviewing men for a podcast, and tweaking our in-person workshops) to see if we can engage more men in zero waste. We’ll keep an eye on our gender stats to see if anything changes. And if you’re a woman and have gotten this far, share it with the men in your life!

Because, men – the world needs you to stop making excuses. Get involved!

***I acknowledge that this post discusses gender in a binary way – there are others better placed than me who could add nuance to these issues, and I’m keen to carry on this conversation!

2 thoughts on “Hey man, where are you? The underrepresentation of men in the world of zero waste”