A year has passed since we gave up our car – woah!

Can you believe it, but we’re still managing to move around/survive/do a fulltime roadshow without any vehicle whatsoever? Liam has even managed to retain some of his manhood in the process, despite doing things like walking and bicycling and not owning a ute. Meanwhile, Hannah’s still on track to reach old age without ever learning to drive #dreambig #lifegoals

Anyway, as promised, we’re continuing to measure our transport footprint, to ensure that our car-free life does indeed lead to reduced CO2 emissions. To read more about our philosophy of transportation you can check out our posts about why we gave up our car and why we don’t fly. You can also check out our first 6-monthly transport footprint. We won’t go into any of that again here, lest anyone’s virtue signalling detectors explode from overexposure.

The anti-climatic (see what we did there?) update is that we haven’t made a massive improvement on our last transport footprint, but we DID travel (slightly) less and we DID manage to emit less – YES! At the end of our first 6-monthly transport footprint we were on track to produce 1.8tCO2e in our first year. We’ve managed to track it down to 1.61tCO2e – so 0.85tCO2e each.

We managed this reduction mostly by applying the learnings from our last 6-monthly transport footprint and making an effort to:

We will be offsetting those 1.61 tonnes of CO2 equivalent emissions. We’ll go with the recommendation of the Sustainable Business Network, which is to donate to Million Metres at the rate of $36 per tonne of CO2e (which apparently takes into account the sequestration rate for native trees). If anyone knows of a better rate, please let us know.

We hasten to add that we see carbon offsetting the same way we see recycling – it’s a last resort, to come only after you’ve done all you can to refuse/reduce emissions in the first place. We don’t feel absolved of the emissions we’ve created because we’ve offset them. We’re also honest about the fact that annual emissions of 0.85tCO2e each, for transport alone, is not in line with the science regarding personal carbon budgets and how much we must reduce emissions in order to keep global warming below 1.5 degrees celcius. We accept this and, as we did in our last 6-monthly transport footprint report, we’re going to look at ways to cut our transport down even further over the next 6 months. We also intend to do more sequestering activities. This is an area we’ve not contributed to much, but we want to after watching 2040 and learning that even if all of us reduced our emissions to zero tomorrow, we’d still need to sequester carbon already emitted. SO, we’re looking forward to spending the next 6 months learning more about Project Drawdown and the concrete actions we can take.

Given how much hitchhiking has helped us to reduce our emissions (we see it as trips in “cars going anyway”), we want to acknowledge all the people who have stopped to pick us up. Apart from the fact that we probably look like the kind of earnest types no one wants to be stuck in their own car with for who knows how long, we also carry a shit-tonne of luggage (including a dedicated ‘mobile pantry suitcase’), which is probably extremely off-putting for a lot of people. Nevertheless, hearty souls have taken pity on us, despite us pulling terrifying stunts like wearing straw hats and playing a ukelele (scroll down to keep reading):

A story about Hitchhiking! We are leaving the lovely Coromandel today to go to Waiheke island for a series of 4 events starting this Friday with the debut of our band No-Waste Nomads and the Silver Beats – a fundraising gig for the Waiheke Community Housing Trust (and no, this video is mercifully not an accurate representation of the musical competence that will be showcased at that event, where we will be joined by five totally grooving musical pros!). With our new car free ways we now mostly hitchhike. Sometimes it can take us several hours to get a ride (we are quite threatening looking for any drivers allergic to hippies), but today we needed to get from Whitianga to Coromandel Town fairly pronto, as we have a boat to catch. We decided to take a risk and play some tunes with our trusty ukelele. A risk because this could have gone one of two ways (two ukelele-wielding minstrels with straw hats could possibly reinforce the alarming hippy demeanour). But we found a spot, whipped out our ukelele and started to sing. As this video demonstrates, the approach was a resounding success!! We didn't even make it thru one song. Thanks Dani and Jason from Auckland 😀 video features the song Sweet P'tata by the Formidable Vegetable Sound System (who are currently touring NZ – catch them at a town near you!!!)

So far, we’ve been picked up 38 times, by all sorts of people, with all kinds of interesting backgrounds, including:

So, here’s to the power of the thumb! Onwards and upwards, for the next 6 months! 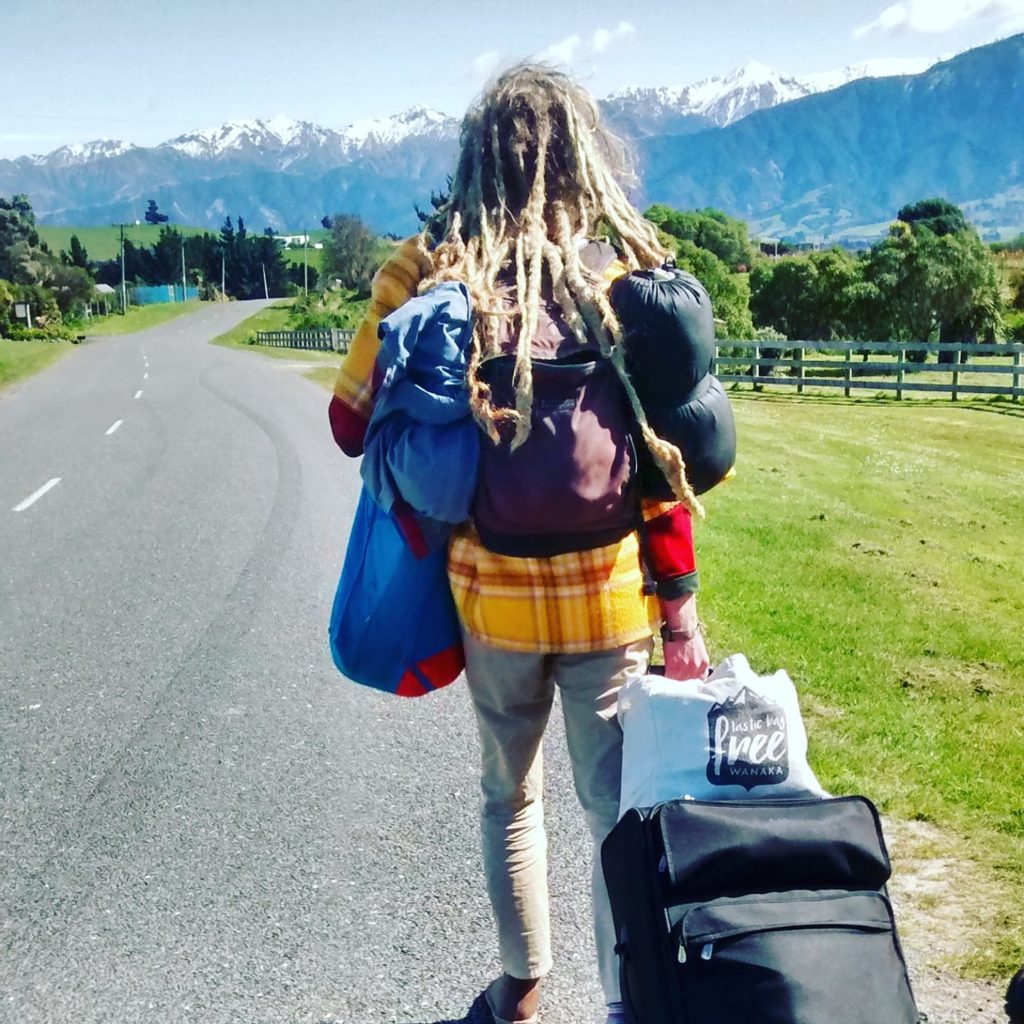 Author: Liam & Hannah
Filed Under: Thoughts and musings
Hey man, where are you? The underrepresentation of men in the world of zero waste
Zero Waste in New Zealand in 2019: A Year in Review