What to Do About Single-Use or ‘Avoidable’ Plastics and Plastic Packaging?

Our Position on Essential Oil Use in Homemade Toiletries 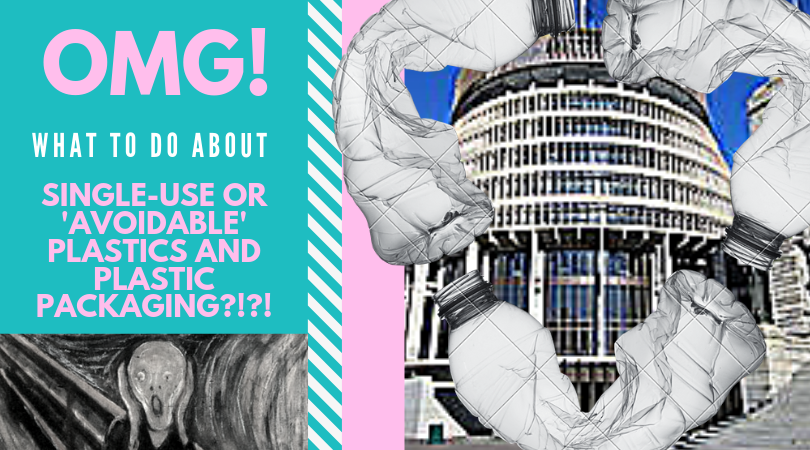 The prevalence of plastics everywhere these days freaks waste-conscious people out and most people seem willing to accept that the way we use and consume plastic is having a disastrous impact on the environment, wildlife, and human health.

Being ‘plastic-free’ is certainly on trend. Virtually every part of the country has its own “Plastic-Free” group, old people wax lyrical about the pre-plastic era, and plastic-ridden supermarket shelves and everyday items like straws and coffee cups have become the focus of online ire.

But what is the best way to approach the issue of single-use or avoidable plastics, and what should we be asking the Government to do?

The Zero Waste Approach to ‘Plastic-Free’

Confusion probably arises because striving to be disposable plastic-free is a core feature of zero waste living. However, it’s only one part. The zero waste approach focuses on all materials, not just plastics.

The way that we approach plastic-free reflects our zero waste starting point. For many plastic-free advocates, anti-plastic is the starting point. Within this philosophical framework, replacing single-use/one-way plastic items and packaging with a single-use/one-way item made of a less toxic material – like paper or glass – is framed as acceptable. The impact of that material’s life cycle or what happens to those alternatives after use is often glossed over (i.e. how much energy, resources and transport is required to make and then bring those products to market, and will they be composted, recycled, binned?). 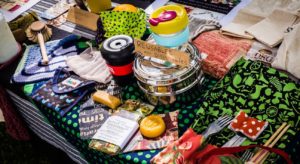 Advocates of zero waste frame plastic avoidance through an understanding of resource efficiency and adherence to the waste hierarchy (regardless of the material in question). This approach focuses on the problem of the ‘throwaway’/linear/disposal-oriented society. Just like it seems nutty to extract oil, process it into plastic, turn it into plastic cutlery to be dispensed at a fast food joint, used once and then discarded, when washable cutlery would do, we also question the resource efficiency of clearing land to grow trees, to then cut down and turn into a ‘single-use’ brown paper bag through an energy and water intensive process, when a reusable bag or container would do. Similarly, we’re not that keen on having to clear land to grow corn, to then process and turn into ‘compostable’ plastic-lined coffee cups that then require the creation of commercial composts and expensive and inefficient waste separation and collection systems in order to break those cups down (which also add no nutrients to the resulting soil) when a reusable coffee cup would do.

So, The Rubbish Trip would like to see the gradual phase-out of single-use disposable plastics (with exceptions for things like medical applications where this is strictly necessary and not just a time and cost saving habit) and their replacement with reusable (not disposable) alternatives. A good example is glass bottle/jar refill systems, which we’ve touched on before (here and here). We would also like to see regulations requiring that the plastics that we do use contain a minimum quantity of recycled content to reduce our use of virgin plastics.

Can the Government actually make these changes?

The New Zealand Government has a very wide range of powers under the Waste Minimisation Act 2008 (WMA) to completely transform how we use plastic. We don’t need to push new laws through Parliament in New Zealand to get radical change.

You might have heard about how the EU Parliament voted in favour of a Directive on Single-Use Plastics at the end of 2018, which proposes banning various single-use plastics throughout Europe and regulating a whole bunch of others that can’t be banned straight away. You may have heard about Pacific Island States like Vanuatu that have banned plastic straws, bags and expanded polystyrene food containers (Vanuatu is currently considering extending the ban to include disposable nappies, plastic cutlery, plastic clamshell cases and plastic produce netting). You may have heard about how countries in the EU and the UK plan to set minimum levels of recycled content in plastic items (or tax plastics that do not achieve this minimum content).

We can do ALL these things and more in New Zealand under existing legislation.

Successive Governments have had the power to do ALL these things since 2008 under the WMA. So far, these powers have not been used, except for the mandatory phase-out of plastic bags (2018) and the mandatory phase-out of plastic micro-beads in personal care products and cleaning products (2017). This is not enough. Furthermore, the current approach of tackling singular plastic items one-by-one is too slow. We will never make the urgent progress needed this way. It’s also wasting the time and energy of community groups and non-profits that have to campaign constantly on single issues. We should follow the lead of other countries and tackle multiple plastic items simultaneously through a broader plastics strategy.

If you’re interested to know what the Government’s powers look like and how they can be used to regulate plastic, at the beginning of this year, Greenpeace commissioned Hannah to write a policy paper on implementing Greenpeace’s Plastic-Free NZ Action Plan. Read both the action plan and the policy paper on the Greenpeace website: 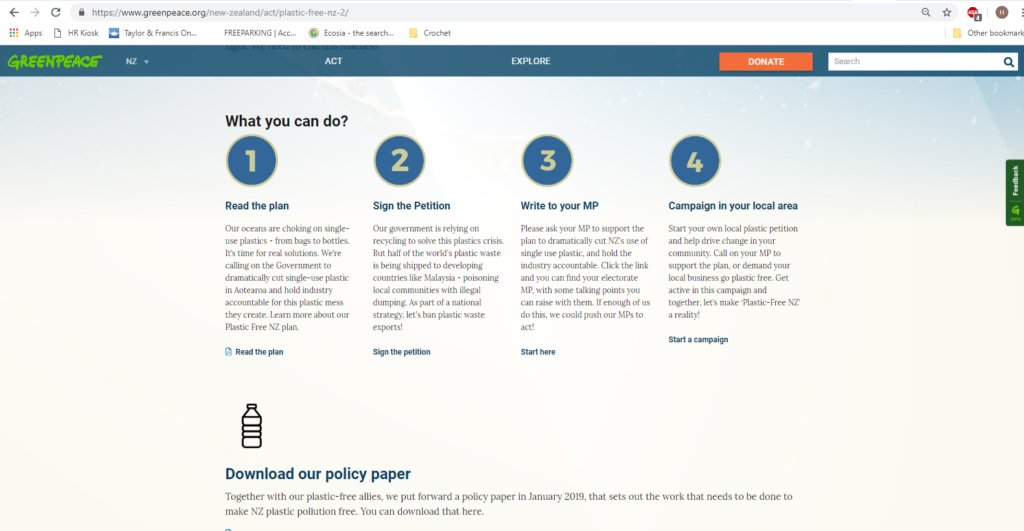 The great news is…

… that in August 2019, the Associate Minister for the Environment, Hon Eugenie Sage, announced a proposal to declare single-use plastic packaging of consumer goods AND beverage containers “priority products” under the Waste Minimisation Act 2008. If this were to happen then product stewardship schemes for these products would have to be developed. Product stewardship schemes make those who design, produce, sell, use or dispose of a product responsible for ensuring the product is effectively reduced, reuse, recycled or recovered, and for managing any environmental harm that product causes when it becomes waste. Basically, it creates the framework for all the types of policy actions mentioned in the Greenpeace policy document. In September 2019, the Minister also announced that work has begun to design a nationwide bottle deposit scheme for beverage containers.

At this stage, it’s all just proposals and preparatory work, but if the priority product declaration goes ahead, the next couple of years will see working groups designing the scheme (and the bottle deposit scheme is definitely going ahead). It’s going to be SO IMPORTANT that we keep our eyes on what’s going on, to make sure that the schemes are the best and most ambitious that they absolutely can be. We want to see deep reductions in the use of single-use plastic packaging and the development of scaleable reuse and refill systems. It’s totally possible, but we must follow the process to ensure we don’t get watered down schemes.

Aren’t some single-use plastics essential? How do we avoid regulation having negative unforeseen consequences?

This post is NOT presenting an exact blueprint for plastics regulation – we’re just highlighting the legislative and procedural pathway and some examples to work with. There may well be occasions where single-use plastics provide a societal benefit that outweighs their environmental harm (for example, medical applications). We want to emphasise that HOW we go about regulating plastics requires consideration of a wide range of things that The Rubbish Trip and other zero waste campaigners do not carry expertise in. We must create spaces where communities who might be affected by regulation have a voice. A good example is the disabled community’s view on plastic straws. Under the WMA, any regulation must go through a public consultation process (you might remember this with the plastic bag ban). Through this consultation, issues can be aired out, unforeseen consequences can be raised, and the proposed policies can be improved. This is a very important part of the process. The public consultation process regarding declaring single-use plastics a “priority product” has happened now, but the scheme design phase is yet to happen. Who’s sitting around the table is key, and we need to ensure the Government selects a wide and representative sample of ‘stakeholders’.

To make a difference, we must prioritise MANDATORY regulation

At Parliament delivering The Kiwi Bottle Drive petition calling on the Government to implement a mandatory, nationwide bottle deposit system for NZ. At the time the Minister said that bottle deposits was “low priority”, but in September she announced a working group to design a scheme for NZ. Currently, roughly 2 million beverage containers are landfilled and littered a day in NZ.

The development of product stewardship schemes to regulate single-use plastic packaging is extremely important; the Government’s proposal is a once in a decade kind of opportunity and it’s important the schemes are not only well-designed, but that they are mandatory. The packaging industry may claim that they’re doing their bit because a bunch of New Zealand businesses signed up to a joint Plastic Packaging Declaration committing to 100% reusable, recyclable or compostable packaging in their New Zealand operations by 2025. Leaving aside that the words “reusable”, “recyclable” and “compostable” actually don’t mean anything unless these claims align with domestic infrastructure, this declaration is NOT mandatory, it’s just a voluntary agreement. Over the years, successive governments have signed a bunch of other voluntary agreements and accords with the packaging industry, but they didn’t stop our plastic waste crisis from happening.

By focusing on voluntary solutions to plastics, successive Governments have acted as if they don’t know about their powers under the WMA. If the plastic packaging industry were serious about achieving the targets in the most recent declaration (or the earlier accords), you’d think they’d have encouraged the Government to regulate and make the targets mandatory in order to level the playing field… They haven’t, but now the Government is proposing to do so. Let’s make sure it really does happen! 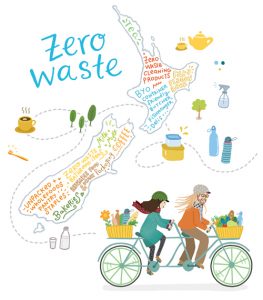